In my last post about filtering, I tried to explain the theory of filtering, so you’d understand which kinds of problems filtering might solve. In this post, I’ll attempt to show how to get started on an actual project. This post is intended for folks who are just getting started with filtering.

Overall Process for a Filtering Project

Generally speaking, I find my process to be something like this:

In my last post, I used the robot product as an example. The robot came in different models, so the matrix I created for that was based on features. But I find that when I change the example, that sometimes produces a different “aha” moment for readers. So this time around, I’m going to use a cookbook example that’s based on audience values (beginner and advanced).

I need to create a cookbook for two culinary school courses: Beginning Baking and Advanced Baking. I’ve determined the chapters I’m going to need and which ones I’ll be able to share between the two different cookbooks. Here’s how it looks: 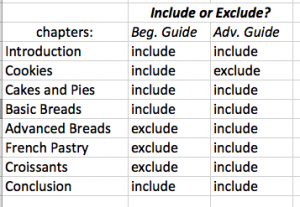 So in this case, we’re going to need two audience values:

In my shop, we use DITA, so I would create a ditaval file for each of the cookbooks. (The filter files are called “ditavals” because they have a .ditaval filename extension).

Note that each of the ditavals includes/excludes the different audience values, like so:

The include/exclude action tells the computer which content to include and which to exclude when you publish your guide. So, for example, when you create the Beginner Guide, you want to see the following chapters:

You do not want to see:

And when you create the Advanced Guide, you want to see:

You do not want to see:

Tag at the Topic or Chapter Level

So, to accomplish this, you would “tag” the chapters so the computer knows what to show and what not to show at build/publish time. Again, in my shop, we use DITA, so my parent Cookbook file (called a “ditamap”) would look like this: 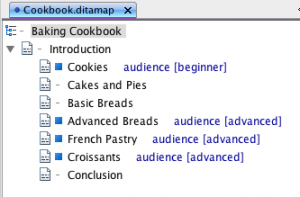 Introduction, Cakes and Pies, Basic Breads, and Conclusion are not tagged. That is because you want these to show (include) in both guides.

Here’s how the guides will look based on the include/exclude information in their associated filter file (the .ditaval):

If you don’t fully grasp this right now, try not to freak out. You’ll test it! You WILL get this to work. It just takes some time for your mind to adapt to this way of thinking.

Tag at the Inline Level

In addition to the topic-level tagging that you’ve done, you may have some text that you need to tag inline (e.g., specifying “audience=(value)” to specific elements). For example, in your Introduction chapter, you could do something like the following (apologies for crappy image; click it for better readability):

For the xml-phobic, here’s a different view of that same content with some nice red arrows to explain what’s going on (again, click the image for better readability):

Refer back to the “Breaking it Down” section above to understand how this tagged content will show or not show in your different cookbook versions.

Here are a few ideas for QAing your tagging:

And again for the xml-phobic, here is the same file in the WYSIWYG-ish view. The green indicates content that is tagged:

Now that you have tagged everything and you’re ready to create the guides, you’ll push the magic button in whatever tool you’re using (for example, running the build on the command line; running the build in Oxygen; running the build via your CMS, or whatever). In Oxygen, I would choose my filter (e.g., beginning_baking.ditaval), my desired outputs (HTML, PDF, .doc, whatever), and then run the build. I would expect the result to be the Beginning Guide.

I tried to pick an example that was complicated enough to describe the power of filtering, but still accessible enough that it wasn’t completely overwhelming. My advice would be to pick a small project and practice on it until you get the hang of filtering.

If you have any questions, feel free to ask in the comments. Thanks for reading!

3 thoughts on “Getting Started with Filtering”