We’re very excited to be able to feature a remote presentation on “The State of DITA 2015” at our March meeting (see the sidebar on our main page for time, date, and location details). In-person attendees will gather for dinner as usual at 6:30, with the presentation starting at 6:45. If you want to attend remotely, please drop a line to pdxdita@gmail.com.

Keith Schengili-Roberts, DITA Information Architect for IXIASOFT and the writer behind the popular “DITAWriter.com” blog, has been doing extensive research on who is using DITA, where they are using it, what tools they are using and why. He has surveyed the technical writing marketplace in the United States and the role that DITA skills and experience have come to play in it. If you want to get a better sense as to who is using DITA, what software tools are popular and the many ways in which DITA is being used worldwide, come to this presentation!

We’re accepting submissions for a short presentation at our March 18th meeting, so if you’ve had the stirrings of a DITA topic in your back pocket, please pull it out, brush off the lint, and turn it into a 20-minute talk. We would love to hear from you on any topic related to DITA XML.

To accept the mantle of grandiloquence, just drop a line to docs@jivesoftware.com before March 1st.

A quick and enthusiastic report on last night’s PDX DITA holiday potluck with special guests from the WritetheDocs PDX Meetup Group. But first, a picture of happy documentarians. 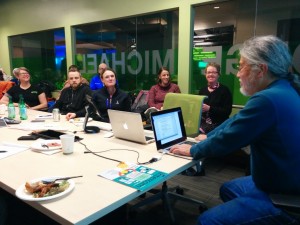 We packed 30 people into our largest conference room for a delicious potluck (thanks Puppet team for the buffalo wings!) and a short presentation introducing DITA to prospective users. Leona Campbell and Melanie Jennings enthusiastically described the benefits and challenges of DITA as well as sharing experiences about what it’s like to get up and running with DITA when you’ve previously worked with different toolsets. Because we had a range of experiences at the table, from DITA consultants to working DITA writers to total newbies, there was a great ensuing discussion about why you’d want to use DITA rather than another tool. We also covered the need for different kinds of tooling depending on scale, the challenges of converting existing content versus writing topic-based content in DITA from scratch, and the always popular question of just how challenging it is to teach yourself DITA.

Another great outcome was the robust audience recommendations of resources, both print and online. We’ll be adding to the Resources section of this site soon, so stay tuned.

A big thank you to Mike Jang of WritetheDocs Meetup PDX for the opportunity to join forces, and to Melanie and Leona for a wonderful presentation. We’re looking forward to hearing more from our attendees, especially those who are starting up their DITA pilots soon.

Our annual Holiday Potluck and final meeting of the year is upcoming on December 3rd. This year we’re featuring a special presentation aimed at new and prospective DITA users, which will also be a joint gathering with members of the WritetheDocs PDX Meetup Group. (We Jivers had a great time attending the WritetheDocs conference this past year, but DITA was not talked about in the presentations. That made us wonder why, and this event is one of the results.)

If you’ve been waiting to show up because you feel like you don’t know where to start learning about DITA, this would be a great time to dip your toes in the water. If you’re a grizzled veteran of DITA and/or PDX DITA, we want to see you too! We’d love to hear about your year in DITA and talk about what you’re doing next.

After last year’s potluck we feel confident in promising a delicious holiday feast. (Please bring a dish! We’re two blocks from Whole Foods and the carts, if you need inspiration.). Then Jive’s Melanie Jennings and Leona Campbell will present a brief introduction to writing in DITA XML, followed by Q&A and general conversation. As usual, we’ll provide beer, questionable witticisms, and stunning views of the Portland skyline.

Looking forward to seeing you!

We’re excited to announce that PDX DITA member, information architect, content strategist, Portland State instructor, and general bon vivant Toni Mantych will be teaching a two-day workshop called DITA for Authors on May 9 and 10th, 2014. The workshop is focused on authoring skills, and is aimed at people who already understand the importance of DITA and its value proposition, but don’t yet have extensive hands-on experience in the authoring medium. It will cover basic authoring knowledge like topic types and element use, but also will get into conditional filtering, keyrefs and conrefs and how to get the most value out of your content. Sounds extremely useful!

Last night’s meeting was almost entirely devoted to discussing conditional filtering, with a few digressions into conrefs, content management systems, and the local taco carts. Melanie Jennings shared her detailed planning process for tagging and filtering a set of DITA files that will currently support six different filtered outputs for different audiences and platforms, but in the future may have to support many more. We also heard about how other PDX DITA members are using conditional filtering in different ways to get the most out of their files, and discussed some of the challenges of ditamap inheritance, enforcing consistent tagging, and, especially, educating all the writers in a group who need to understand not only the tagging model but how and to whom the final output will be delivered.

We were excited to have Toni Mantych join us for the first time. Toni teaches DITA over at Portland State and is planning to teach a DITA workshop in May through the local STC chapter. Stay tuned for more news about that workshop in a future post.

If you’d like to attend the next meeting in June, please check back here for the date or contact us to be added to the email list for reminders.

Hi DITA enthusiasts! We have an opportunity working on developer onboarding docs here at Jive Software (the current meeting place of the PDX DITA group): you could be based out of Portland or Palo Alto, reporting to our documentation team but collaborating heavily with our platform API team. If you’re interested, you’re welcome to apply directly via JobVite.

Anyone who has been to a meeting has probably already raved about our beer, snacks, and view of Powell’s Books! We’re also very modest and charming.

The work for this position will not primarily use DITA, but the rest of the Docs team authors in DITA and you’d almost certainly get the opportunity to use those skills.

Reminding all DITA enthusiasts that PDX DITA’s annual potluck and Year in DITA roundup discussion will take place at Jive Software next Wednesday, December 11th, from 6:30 to 8:00. Make something to share, run by the carts on your way in, or just have a beer and some pretzels on Jive.

We’re hoping to discuss breaking events in DITA world, talk about what we learned at LavaCon, and brag about our conversion to Oxygen Webhelp. What’s up in your world?

At last week’s PDX DITA meetup, we were able to Skype in LA area DITA consultant Mark Giffin as an honorary Portlander. (He’s even planning on growing some interesting facial hair for future Portlandian meetups.) There were some great informative discussions and on learning that he’s attending the CIDM Content Management Strategies/DITA North America conference this week, we were able to sign him up to report in from DITA Central. We’re looking forward to hearing about what you’re learning, Mark!

(See details of the April meetup in the sidebar of this website. Hope to see you there! We’re going to talk about documentation for mobile devices this time.)

April is the cruellest month1, breeding
Lilacs out of the dead land, mixing
Memory and desire, stirring
Dull roots with spring rain2.
Winter kept us warm, covering
Earth in forgetful snow3, feeding
A little life with dried tubers4.
Summer surprised us, coming over the Starnbergersee
With a shower of rain5; we stopped in the colonnade,
And went on in sunlight, into the Hofgarten,
And drank coffee, and talked for an hour6.
Bin gar keine Russin, stamm’ aus Litauen, echt deutsch7.
And when we were children, staying at the archduke’s,
My cousin’s, he took me out on a sled,
And I was frightened.8 He said, Marie,
Marie, hold on tight. And down we went.9
In the mountains, there you feel free.
I read, much of the night10, and go south in the winter11.

NOTES
1This product release is going to be brutal. Glad we have a PDX DITA meeting a week before to break up the agony.
2Unless it’s awesome! This time, maybe there will be no typos and the programmers will have told us everything that changed!
3Oh dammit. That module no one has touched since last December.
4Well, perhaps not so little anymore given our diet of breakroom potato chips.
5Quelle surprise. You say you live in Portland?
6Those product managers will talk your ear off. But they paid for the coffee at least.
7No, we don’t have a Lithuanian translation yet, but please check with Sales for an update on our future i18n road map.
8Even in childhood, many technical writers are drawn to low-risk situations and fear lack of control.
9That wild sensation of careening toward the future that is unleashed when you press Enter after typing an ant command.
10Build logs, mostly. But sometimes Kant, or the 50 Shades series.
11Totally springing for the campsite with the showers this year.