Last day of the conference! Half day only today.

Antenna House makes an XSL-FO processor called XSL Formatter (in DITA we mainly create PDFs with it). One of their guys gave a talk on a new tool they have created that compares PDFs. Doesn’t sound like much but this tool compares the PDFs pixel by pixel and is capable of finding and flagging the slightest changes. It turns out that you can’t just do a diff on the two FO files used to create the PDFs and have it tell you all the differences there could be in their resulting PDFs. There can be many other factors involved. And the Adobe Acrobat diff tool won’t do it all either, and also has a limit on the number of pages you can compare. Apparently the only way to do this before was to visually compare each page of each PDF.

Frank Miller of ComTech gave a talk on using RelaxNG with DITA. RelaxNG is a simplified XML schema language that is equivalent to DTDs and W3C Schemas, but is simpler and easier to use than either of those, especially in the area of DITA specializations. RelaxNG is so superior that the DITA Technical Committee has decided to use it as the standard schema for DITA, hopefully in the upcoming DITA 1.3. But they needed someone to write a script that converts a RelaxNG schema into equivalent DTDs and W3C Schemas, so I volunteered to do this.

The final session was a long one, a panel discussion on the DITA OT with several people including Robert Anderson, the main architect of the OT. It was really good and I learned that they need help in many areas, not just programming and bug fixing. Documentation is one thing that is needed. If you’re interested in helping, contact Kristen Eberlein.

And then it was over. I learned a ton and made many excellent contacts. Highly recommended if you’re interested in DITA.

By the way, Rhode Island seems to have its own style of graffiti. It has a lot of nice fast lines densely packed together, and it looks like it requires some skill. Here’s a specimen on the wallpaper in the men’s room in Murphy’s Pub in downtown Providence: 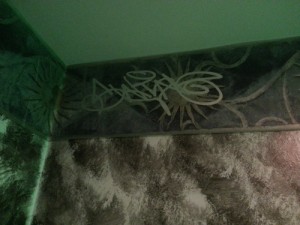 Your guest blogger signing out now, it was lots of fun and thanks for having me!