First day of the conference! Here is the crowd at the keynote presentation. We were told that this is the largest attendance ever for this conference, at 345. 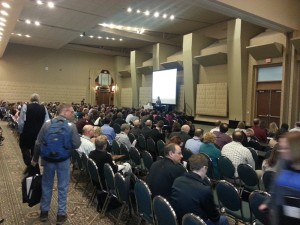 The keynote speaker was a fellow named Gerry McGovern, who made a good argument for not worrying about how many hits your website gets, and to instead focus on pushing to the top of search responses the things that your users need most. Did you know that the Microsoft website has about 15 million pages, and out of those about 4 million have never been accessed by anyone? His presentation was very entertaining. He has an Irish accent, and I had some quiet juvenile joy when when he pronounced “third cousin” as “turd cousin.”

Then the regular presentations started. I chose Severin Foreman’s talk on how he became an information architect and what that entailed. I realized that being a DITA IA probably requires a good many people skills as well as technical skills.

I next attended a presentation called “DITA Mythbustin'” by Tom Magliery of JustSystems, makers of the XMetal XML editor. He went over a bunch of beliefs about DITA such as “It’s only for large companies” (he said false) and “It’s too complex” (he said true, but not hopelessly so).

I saw another talk or two and then there was lunch, where they had a bunch of tables set up for “Birds of a Feather” lunches at each table. One person at each table moderated a conversation about a different DITA-related topic, and there were dozens of them. I chose one where Edwina from Kaplan Publishing in NYC talked about getting DITA output from InDesign.

After lunch I saw a talk by two guys from Citrix (Patrick Quinlan and Dustin Clark) who have created this wild DITA setup where a lot of writers author in plain MS Word but use a few special codes in the text, and then they run it through this custom web-based system that converts the Word files into DITA topics, which are then output to various things like PDF and mobile-friendly HTML5 using the DITA Open Toolkit. Then I heard Robert Anderson of IBM talk about what’s coming in the next in the next version of DITA (1.3). They’re trying not to overwhelm people with as many changes as were made in the 1.2 version, but there are a few interesting things coming.

I attended a talk by Matt Kaatman, who gave a fascinating (to me) history of the DITA Open Toolkit and talked about how you can help with its development. All help is welcome, and I would like to do this at some point.

My last talk was by Jeff Engle from Xerox. He implemented several highly successful DITA-based systems at Xerox. Two of these systems were in somewhat uncommon areas for DITA: Human Resources and training. He is getting a 50% reuse rate for the HR project, which is huge. In this HR project, some of the docs they were converting went back 100 years. One of the employee benefits back then was access to an “iron lung.”

Here’s a shot of many (or maybe even all) of the members of the OASIS DITA Technical Committee standing around yakking on a break. From left to right: Eliot Kimber, Amber Swope, Kristen Eberlein, Kristof Van Tomme (not on the committee), Michael Priestley, the back of Don Day’s head, and Robert Anderson looking slyly at the camera. Robert is the chief architect of the DITA Open Toolkit. 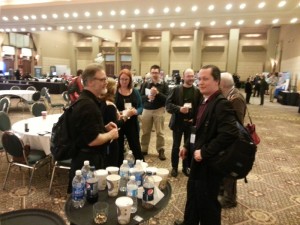 As if all of that wasn’t enough, at the end of the day there was a vendor’s reception, which meant more alcoholic beverages and some really good hors d’oeuvres like coconut shrimp. I went around to the vendor booths with my beer and got a bunch of demos and exchanged more business cards. I noticed that many companies are looking for ways to enable easy authoring in DITA for people who wouldn’t go near a full XML editor. There wasn’t enough time to get to all of the vendors and I was getting pretty beat by this time, so I went to the hotel to write this before I dropped.

I received a massive amount of DITA (and related) info today, and there is still a day and a half left. But I’m not tired of it and I look forward to tomorrow morning!